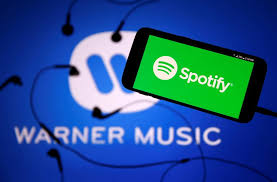 Spotify has convinced all the major labels to sign up to new multi-year licensing deals.

Warner is the latest and last to agree to a deal whereby its recorded music catalogue will be available on the service for the foreseeable future.

Universal and Spotify reached a deal in April. Sony were reported to sign a deal last month.

You’d imagine Warner held out for the best possible agreement.

“WE ONLY AGREE TO TERMS THAT ARE NET-POSITIVE FOR OUR RECORDING ARTISTS AND SONGWRITERS.”

He said then: “We only agree to terms that are net-positive for our recording artists and songwriters.  At the same time, we want to stimulate a healthy and competitive ecosystem.

“Finding this balance has helped us sustain our momentum and grow the value of music.”

Ole Obermann, Chief Digital Officer, WMG, commented on the renewed partnership with Spotify: “It’s taken us a while to get here, but it’s been worth it, as we’ve arrived at a balanced set of future-focused deal terms.

“Together with Spotify, we’ve found inventive ways to reinforce the value of music, create additional benefits for artists, and excite their fans all over the world.

“Even with the current pace of growth, there’s still so much potential for music subscription to reach new audiences and territories.”