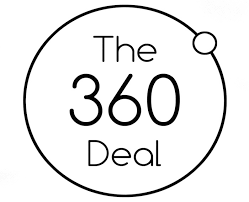 A 360 deal is a business relationship between an artiste and a music recording company. The company agrees to provide financial and other support for the artiste, including direct advances as well as support in marketing, promotion, touring and other areas. In turn, the artiste agrees to give the company a percentage of an increased number of their revenue streams, often including sales of recorded music, live performances, publishing and more. 360° deals or clauses in music recording contracts are deals or clauses that ensure that record labels participate in the ‘non-recording’ revenue streams of artistes signed to them. It can be a separate deal or embedded in the recording contract as a clause.

This aforementioned business arrangement is an alternative to the traditional recording contract. A traditional recording contract only provides an income stream for the label from record sales.   Under the traditional system, the label would pay the artiste a ‘small’ royalty which was even smaller after all the deductions.  The artiste could expect to receive no recording royalty at all unless his album becomes a major commercial success.  But he gets to keep everything else: publishing, merchandising, touring, endorsements, etc.

However, in a 360 deal, a company typically provides support to an artiste in more areas than covered by a traditional recording contract on the condition of receiving a percentage of revenue from these additional areas. In fact, most 360 deals have “catch-all phrases” giving the label a financial interest in everything else that the artiste does in the entertainment business.

While this concept potentially solves some of the revenue woes of the record label, what about the artiste? For a new artiste the 360 deal is like a “double edged sword.”  Every Upcoming/new artiste would love to be signed to any major record label; but if such artiste has to include the label in on additional income he makes, the artiste is putting more money in the label’s pockets than in his own bank account.

However, these days, artistes often generate more money from other activities than record sales.  For instance, Lady Gaga’s Monster Ball Tour grossed over $227 million dollars, Wizkid was reportedly earning N120Million over two years via his endorsement deal with Globacom. These developments have spurred the labels to seek to participate in all the possible revenue streams generated by an artiste.

In some other cases, there is the usual act by relatively small labels with no reasonable financial clout  insisting that new artistes sign 360 deals with them even if they put little or no money into recording and make no promises in regard to marketing or promotion.  These companies expect the artiste to provide fully mastered recordings for little or no money upfront, and they demand income from all sources of revenue.

The labels argue that 360 deals are fair because monies generated from touring, merchandising , endorsements, and other streams would not exist at all without their efforts. On the other hand, Many artistes and their representatives would contend that it isn’t their fault that the labels are making less money from their records.

The ability of the artiste in improving a 360 deal shall be dependent on the artiste’s leverage as much as his representative/attorney’s knowledge and negotiating skills. For instance, if there is a bidding war among two or more labels, the lawyer’s ability to improve the deal increases immensely.

If the artiste is already making significant income from live shows or merchandising as it pertains to the brand, and not from record sales, this can also aid his representative/attorney in negotiating better terms or at least carving out those areas where the artiste is already earning money from the 360 deal.

If an artiste is already earning revenues from a particular source, he or his representative should try to carve that stream out of the 360 deal. For instance, certain artistes earn thousands and millions of naira from live performance over a period of time. If a label wants this kind of artiste, it should be prepared to forego all or a  large chunk of live performance income as they had nothing to do with creating it.

A motivating factor for the artiste in yielding to certain provisions in the 360 degree clauses is the size of the amount that would be paid to him as “advance” upon the execution of the contract  The label has to work for the money or at least pay advances for each stream.

While the 360 deal / clause enables the label to participate in all other revenue streams of the artiste, they typically do not impose any obligations on the labels to develop these aspects of the artiste’s career. If an artiste decides to agree to a 360 degree deal/clause in a recording contract, such artiste  must try to obtain guarantees from the label that it will offer services necessary for carrying out any incidental activities. The label must also explicitly agree to actively participate and support such activities in order to receive any revenue from them.

360 deals or clauses in recording contracts can be extremely complex, and coupled with the peculiarity of every single deal due to certain circumstances/occurrences,  there is no hard and fast rule to the Pros and Cons of 360 deals. It could be beneficial in some cases (e.g Lady Gaga) or otherwise in some others.